Demand for nurses on rise as families, with elderly to care for, go on vacation 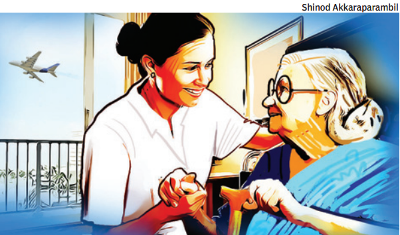 CHENNAI: Unlike other patients in the hospital ward, K Ramani, 83, had no tubes running across his body or saline solutions attached to him. An attendant would give him his meals and medicines thrice a day and accompany him on his evening walks. Sometimes, a curious fellow ward-mate would ask details of his ailment.

"I tell them the truth: My family is on a holiday and they admitted me here because I'm too old to travel," says Ramani, a retired schoolteacher who lives with his son and his family in Kilpauk.

While Ramani's family goes on a vacation every year, 44-year-old home-maker Vimala will be going on a holiday next week, for the first ti me in a decade, leaving her mother in the care of a homenurse. "I feel guilty , but we all need a break," says Vimala whose 87-year-old mother was diagnosed with Alzheimer's three years ago. "She had mobility issues from very early on, and travelling wasn't easy . It was hard on her and us," says Vimala. City nursing homes report a spike in calls from people looking for care-givers for their elderly kin as they plan holidays. Some ask for nurses who can take care of them at home, others for short-term stay overs for the elderly.

R Muthukrishnan, senior manager at HelpAge India, says the organisation recei ves at least two calls a day in the summer and wedding season asking for referrals for short-term stay .

"Sometimes caregivers need time off to relax too or take care of other responsibilities. This can't happen if there's an elderly person at home, especially if they have mobility issues or dementia or Alzheimer's," says Muthukrishnan. While the city has facilities for long-term stay for the elderly, there are only a few that cater to those seeking short-term stay .

Recognising this need, Krishna Kavya, co-founder of Front-Enders Healthcare, started a service for the elderly three years ago where trained attendants are sent to their clients' homes. "Some require medical attention, but many don't. They either have high BP or vision and hearing problems, or diabetes, or ortho-related issues like knee pain," says Kavya, who is currently catering to 50 families, 30 of them for a short duration of 4-5 days. "We have people who have suffered from stroke earlier but are fine now. Their families still prefer having someone around to take care of them in case of emergency," she says.

It isn't just the physical part, families are also worried about their safety . "Appointing home nurses for shortterm care is still rare because of the cost and security reasons," says geriatric physician Dr V S Natarajan, who gets requests from hapless families. "I don't know where to refer them to. We have very few facilities for short-term stays. They are even more reluctant to take them if the person suffers from a condition," says Dr Natarajan. 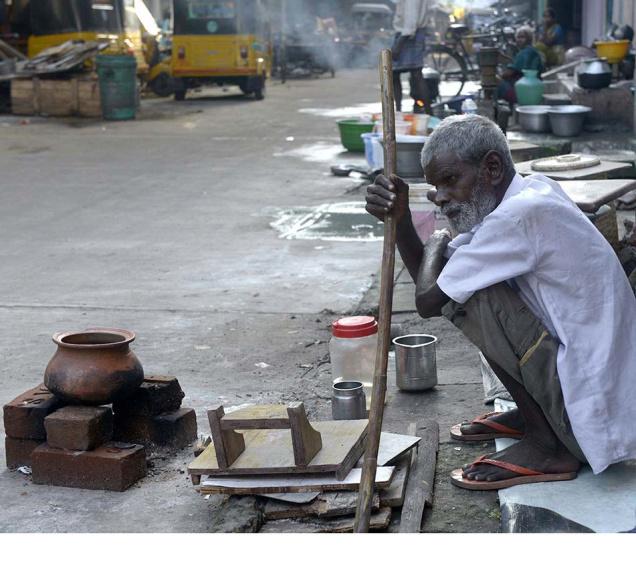 Volunteer group to give elderly a hand 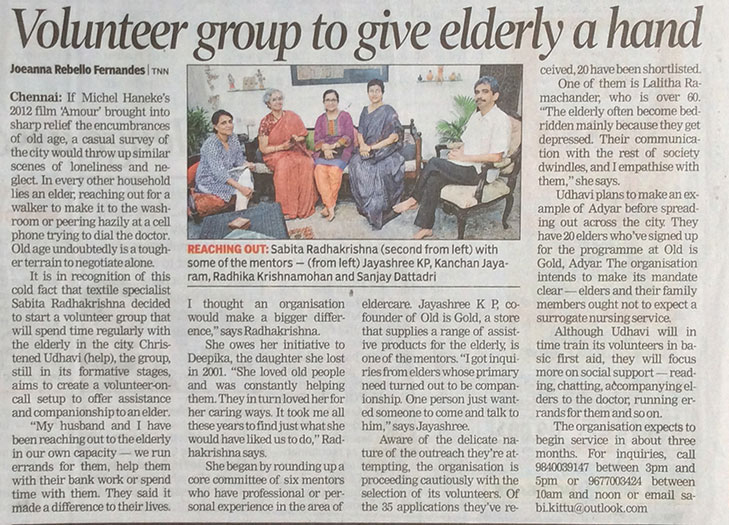 Making them feel on top of the world 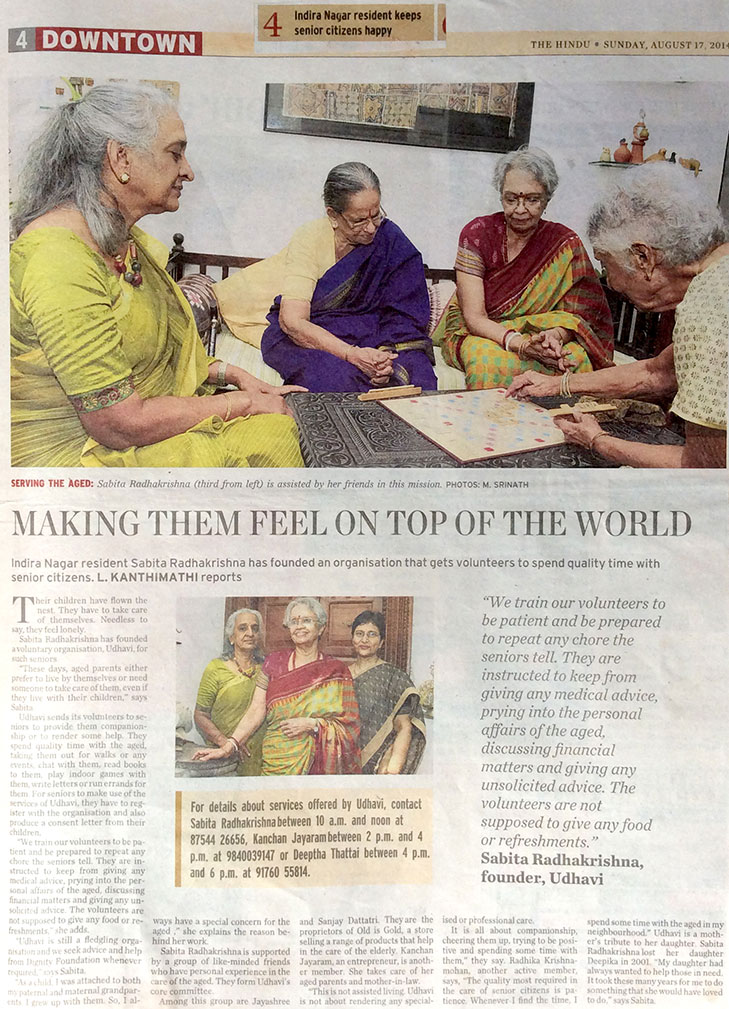 It's not about stopping the clock, but about positive ageing. Hema Vijay meets Dr. V.S. Natarajan, India's first professor in Geriatric Medicine, who was awarded the Padma Shri recently

Now, after over three decades of caring for the aged, Dr. Natarajan has been recognised for the path-breaking service he has rendered to senior citizens, by being conferred the Padma Shri this year. “It is an honour for all senior citizens of the country, is the overwhelming congratulatory message that I keep getting”, he says with a smile.

Reading Fergusson Anderson's Problems of the Aged was a great inspiration, and following late MMC Prof. A.L. Annamalai's suggestion, Dr. Natarajan headed to U.K.'s Southampton General Hospital in 1973 to train in geriatric medicine. Ever since, the doctor has continued making pioneering achievements — he established the country's first geriatric inpatient ward in 1988

In 1996, he established the country's first M.D. programme in geriatrics under the MGR University. Dr. Natarajan was also part of the team at the NGO Senior Citizens Bureau, which started the popular senior citizens' journal, Link Age.

Then, there is the unique memory clinic that he runs for the elderly, and the free geriatric camp that he holds every week at various villages in the state, which have no access to health care, leave alone geriatric care. “When I retired, I decided to move into the community to serve”, he says, adding, “The idea was to prevent health trouble, rather than just resorting to treatment when trouble strikes”.

Over the years, Dr. Natarajan has been making a sustained pitch for promoting geriatric care through numerous research papers, books (Nutrition for Better Health in Old Age, Ageing Beautifully), videos (Mind your Mind) and conferences.

Doctor at your doorstep

Recently, Dr. Natrajan helped the Senior Citizens Bureau establish the Geriatric House Call project, which is a helpline that brings doctors and nurses to the doorstep of the elderly, through just a phone call (26412030, 9884145189, 28231388). Several of Dr. Natarajan's former students are part of this 35-doctor strong helpline which includes physiotherapists, general physicians, geriatricians, nursing assistants and even a drug delivery service (9962013178). Efforts are on to establish such help lines in the cities of Madurai and Tiruchi. Dr. Natarajan also reckons that there is great scope for trained geriatric nursing assistants. “If our poor and less educated girls and boys can be trained in this, it would be a route to financial independence for them, besides satisfying the huge need of the growing numbers of financially-independent but physically-dependent elders in society”, he points out.

Not just cardiac issues, but memory loss, dementia, osteoporosis, falls and urinary incontinences are areas that senior citizens need to stay on guard about, informs Dr. Natarajan, who never misses his morning walk and meditation routine every day. Dr. Natarajan continues, “About 30 to 40 per cent of memory loss is treatable, but many senior citizens suffer its impact without seeking treatment. And do you know, pneumonia, which troubles so many elders can be prevented by a vaccine that gives protection for 10 years? Properly handled, old age can be a good period of life.”

Especially so, if you are working for others, focused on a bigger vision than personal goals, like this 72-year-old.

Geetha Shekar joined our UDHAVI family two years ago, as a very efficient, committed and eager volunteer. Amazingly independent, she would go on her own to visit our beneficiaries, and won their hearts with her care and concern. In a relatively short time she was part of our Core Group. Whenever meetings were held in our home she would come earlier to make the tea for seven or eight of us gathered there for the meeting.

Geetha and Shekar were of great support to me, along with other members of the UDHAVI family when I had two major tragedies in my life. Geetha was there at the hospital, at home and seemingly everywhere, and I will never forget that. Even during her brave fight with cancer, she was positive, would attend meetings and was active till the disease rendered her physically broken. Geetha was always impeccably dressed and even on my last visit to her weeks before she passed on she wore a smart kaftan, sat down and talked to me, and advised me to collect UDHAVI files which were with her, and a tiffin carrier that I had left at their residence. It amazed and touched me that even during those periods of intense suffering and pain she continued to do what had to be done.

Kala Sridhar was discovered by Lalitha Ramachander. She was a precious find, and from the day she joined UDHAVI she was so dedicated and focused and started her work with elders who grew to love her. Distance never deterred her and she was willing to drive her car herself from Thiruvanmiyur to Annanagar, and getting to know and be of service to all our beneficiaries. Very soon she joined our Core Group, and had so much to report at meetings.

I will never forget our trip to Orissa and the way we had fun, apart from attending the Lit Fest where I read a paper. We shopped, and we talked, exchanged confidences and forged one more link in our friendship. I had great hopes in Kala as a lead personality in UDHAVI. She was ever willing to help at a personal level, and never expected any compensation in terms of money, she only wanted love and a big hug which she got in plenty from all of us.

In her battle with a deadly form of cancer, Kala fought as only she could, always positive and smiling, confident she would over come the disease. She succumbed, tired and heartbroken on Sept 9th 2016, leaving us all desolate and grief stricken.

I never dreamt that exactly a week later death would claim my beloved husband in one fell swoop as I still mourned for Kala. He has been supportive of UDHAVI, preferring to remain in the background preparing delicious snacks for our meetings and advising me on practical issues.

We are still grappling with the terrible loss, but the spirit of these two wonderful people remain with us at all times.

Joint families used to offer a support system for the aged

Two decades ago, when Sheilu Sreenivasan founded the Mumbai-based Dignity Foundation, a non-profit organisation working for the elderly, little did she expect that the demand for old-age homes would grow the way it has. “Earlier, only destitute people sought shelter in homes, set up mostly by religious institutions, but things are changing,” she says

The government lists at least 10 welfare schemes for seniors, such as pension, widow remarriage aid, free saris and dhotis. In 2011-12, it announced an Integrated Complex of Special Homes in each State block, for which it adopted existing homes and took over 75 per cent of their funding. Chennai has one of these complexes.

Most homes in the city are run by NGOs

The 2011 Census put the elderly population in New Delhi at over 13 lakh. Despite this, the government and civic bodies operate just five homes for the elderly. The Delhi government operates two, with a capacity of 75 residents; and the New Delhi Municipal Council runs two of similar capacity, with a third underway. These homes are meant open only for destitute and infirm persons aged 60 and above, and not suffering from any communicable disease. A large number of seniors, often abandoned by families, are left to fend for themselves.

The elderly constitute 8 per cent of the city’s population, and yet the facilities are too few. “The demand for old age homes and services is not in sync with the number available or the care services,” said social activist Alok Sen. 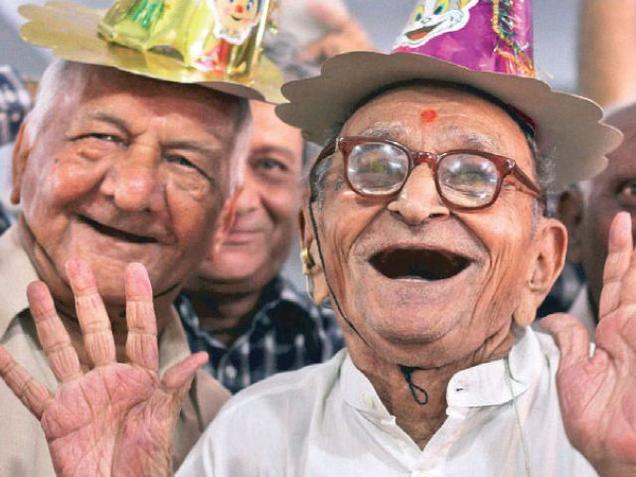 Maharashtra has around 200 homes, with 40 in Mumbai and its suburbs. While a few are government-run, the majority is run by charities. Over 10 per cent the State’s population is aged above 60, higher than the national average of 8.5 per cent.

'Just increasing pensions is not enough' 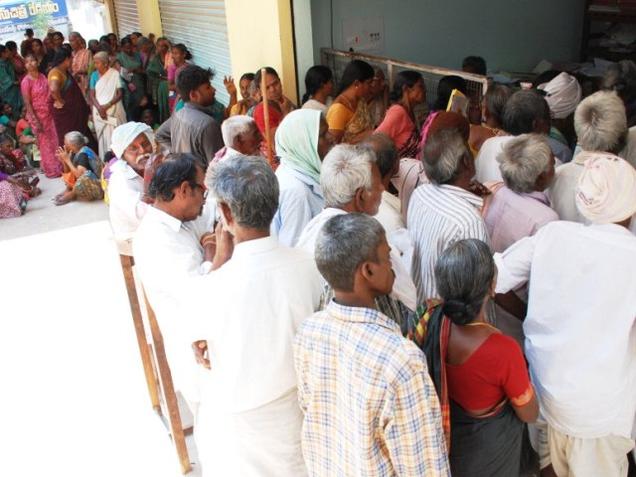 The city, like others, has seen an increase in the number of elderly opting to stay away from their families, especially in the higher income groups. Retirement homes are now big business, with even big realtors venturing into it. These premium places offer facilities similar to top-end apartments, with the only qualification being an age of 50 or above.

Old but not gold 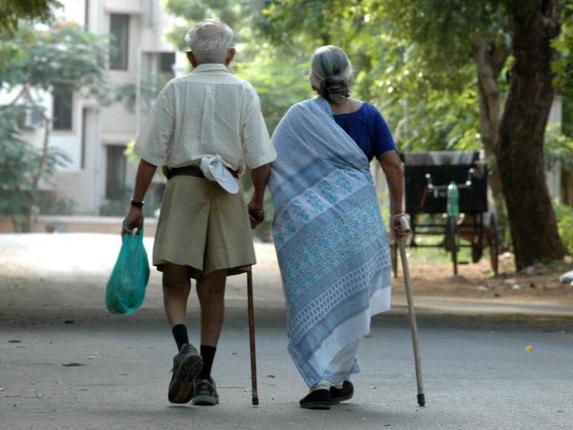 Independent India was born an extraordinarily young country. The median age was just a little over 21, and nearly 60 per cent of the population was under 25. With life expectancy just 36 years, the issue of managing an ageing population must have seemed like challenges for the distant future.